Shadowing an Industry? Effects of an Eclipse on Solar Power in the U.S.

Shadowing an Industry? Effects of an Eclipse on Solar Power in the U.S.

Zoologists, astrologers, and eclipse chasers are all preparing for the event on August 21st, the first of its kind in 99 years—a total eclipse of the sun, when the moon will block all direct sunlight in a swath across the United States for upward of two minutes in some locations and all 50 states will see at least a partial blockage, some for almost 3 hours.[1][2] Another group preparing behind the scenes are the electric utilities. With more than 44 gigawatts of installed solar power across the U.S., enough to power over 8 million homes, the Moon’s shadow is going to have a noticable impact on electricity supply during the eclipse.[3] The question is, how much of an impact? 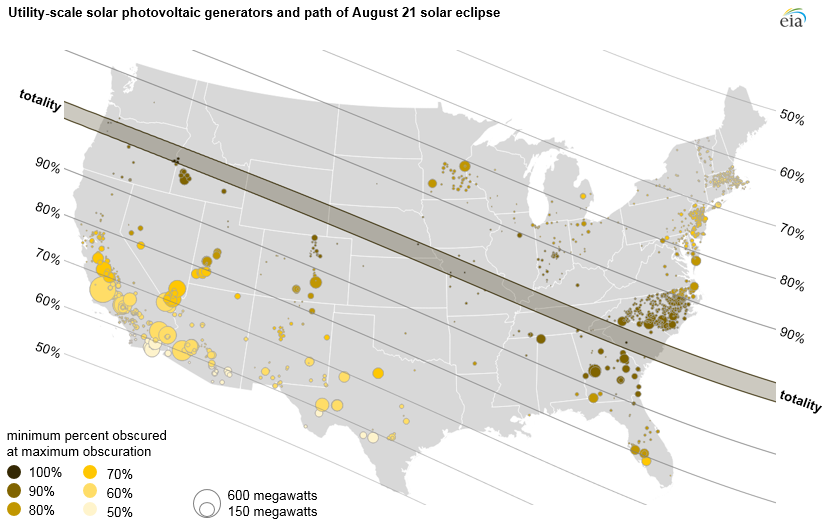 The Energy Information Agency produced the figure above, illustrating that almost 2,000 utility-scale solar plants across the U.S. will experience some amount of obscured sunlight during the eclipse.[4] That means that we could lose more than 12,000 megawatts of solar power on the grid, equivalent to the power of about 12 nuclear reactors.[5] Luckily, our energy sources are diverse in most regions, comprising various technologies such as natural gas, nuclear, hydropower, and wind, so utilities will be able to adequately compensate for the loss of solar power by shifting to other generation sources.[3] The real challenge will be managing the sharp drop and then rise of solar power on the grid as the eclipse evolves — for example, California’s electric grid will lose 70 megawatts per minute as the shadow advances — meaning that substitute energy sources need to be able to “ramp up” and then down during the eclipse.[6]

Meanwhile, the electric utilities, plant operators, and grid managers will be taking notes. The next big eclipse to hit the U.S. will be April 8, 2024, at which point we’ll have even more solar power on the grid, meaning larger potential impacts. Emerging technologies such as grid-scale energy storage (aka big batteries) and “smart” systems incorporating demand response (e.g. automatic air conditioner shut-off when there's too much demand on the grid) will hopefully be in play by then, offsetting unbalanced supply and demand due to the eclipse.

This year, along with the benefit of advance warning (grid officials have been preparing since 2016), we also benefit from best practices of Germany’s response to a major 2015 eclipse, which they weathered successfully by dialing up their nuclear, fossil, and hydropower generation.[7] According to the North American Electric Reliability Corporation (NERC), grid reliability issues such as blackouts are unlikely during the eclipse thanks to much coordination and preparation, so we can sit back, relax, “unplug”, and enjoy this astronomical spectacle…with safety glasses of course.